The final piece of my four part #NewYork series! I’ve covered where to stay, where to eat and what I wore, so now I’m talking things to do.

The real question is – what ISNT there to do in the Big Apple? Whatever you like to do on vacay, you will pretty much be able to do it here! That city that never sleeps is also the city that’s always changing and getting even more awesome.

A lot of people tend to visit in autumn/winter time, however I’ve only ever been in the summer time. Although it’s  pretty warm, it’s far less busy so it’s really easy to get around without it being too crazy, which I much prefer. Summer in the city has a really relaxed vibe, exactly what you want when you’re taking time out.

Myself and the Mr sometimes differ about what we like to do when we’re away – I’m all about the relaxation, whereas he likes to keep moving and keep busy. I feel like we got a pretty good balance this time, so here are some of the things we did. Wonder if you’ll guess which ones were firmly on my personal agenda…

NOTE: some of these things we did during our first visit in summer 2013, this was the year before I started blogging so I thought I’d include them now (though some of the pics aren’t quite as good, sorry!) 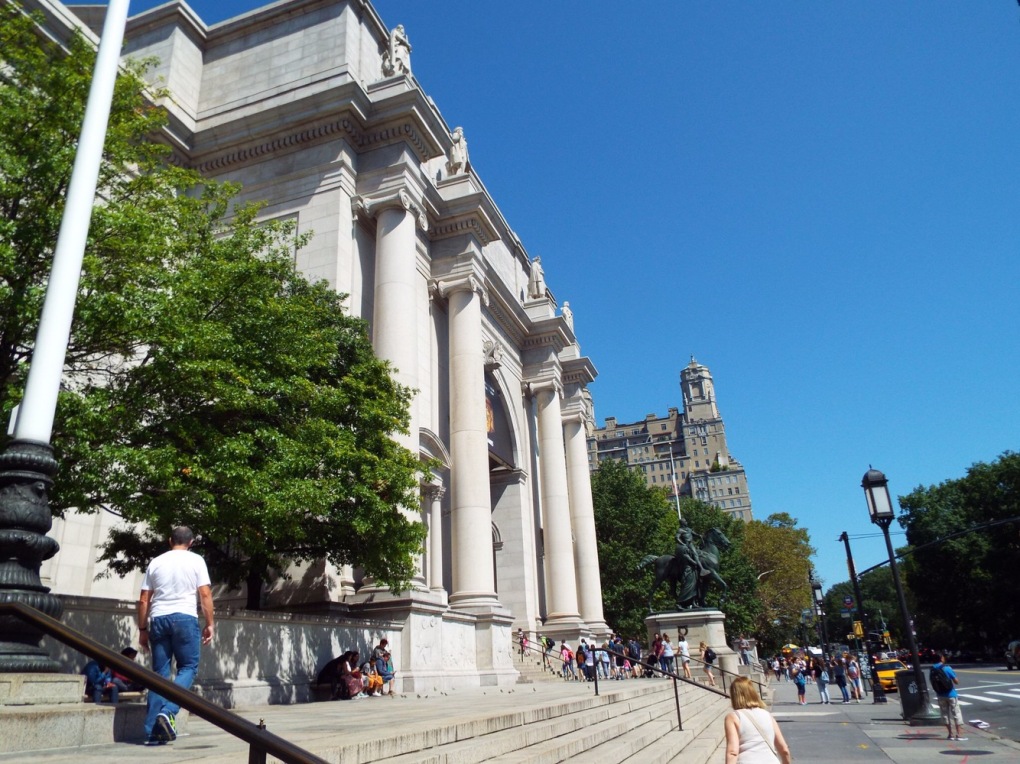 I’m not into that many museums (uh-oh, my lack of culture is showing) but this is one that has a lot of variety and appeal to a lot of interests. Also, it’s a bloomin’ gorgeous building! 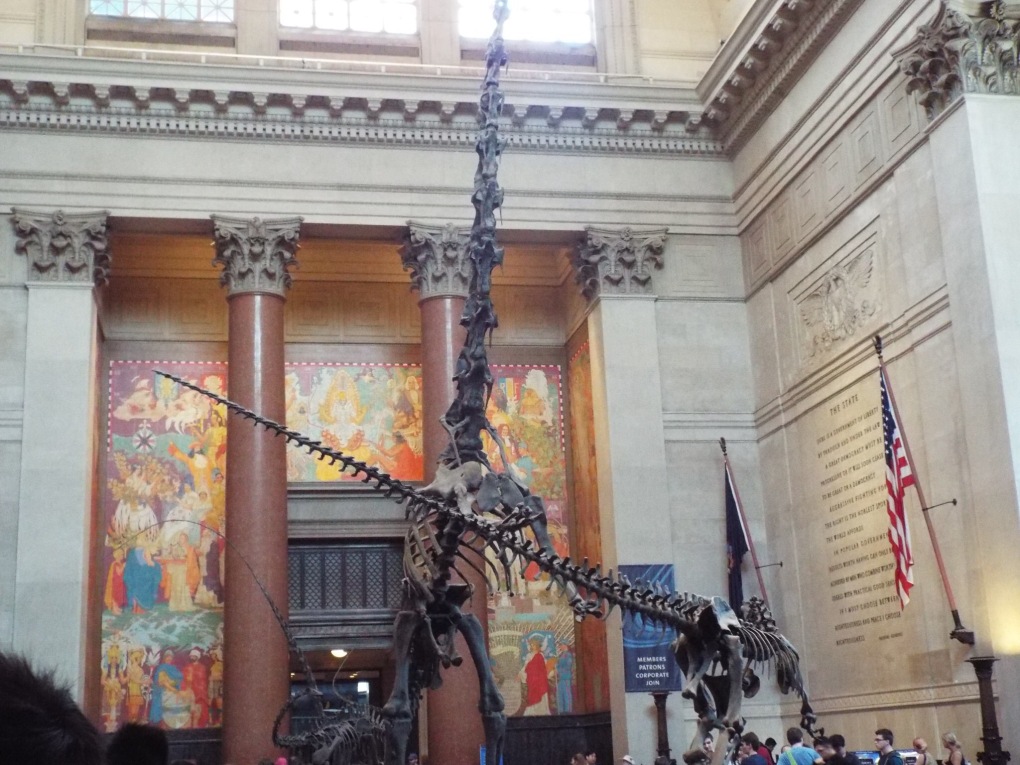 As well as the mass of zones and exhibits there are also extra things to enjoy so make sure you allow lots of time to visit (we spent about 4 hours inside and still didn’t see everything).

Highlights for me included the planetarium and the Titanosaurus, which makes T-Rex look like a toddler. Not forgetting this famous film star… Dum Dum! 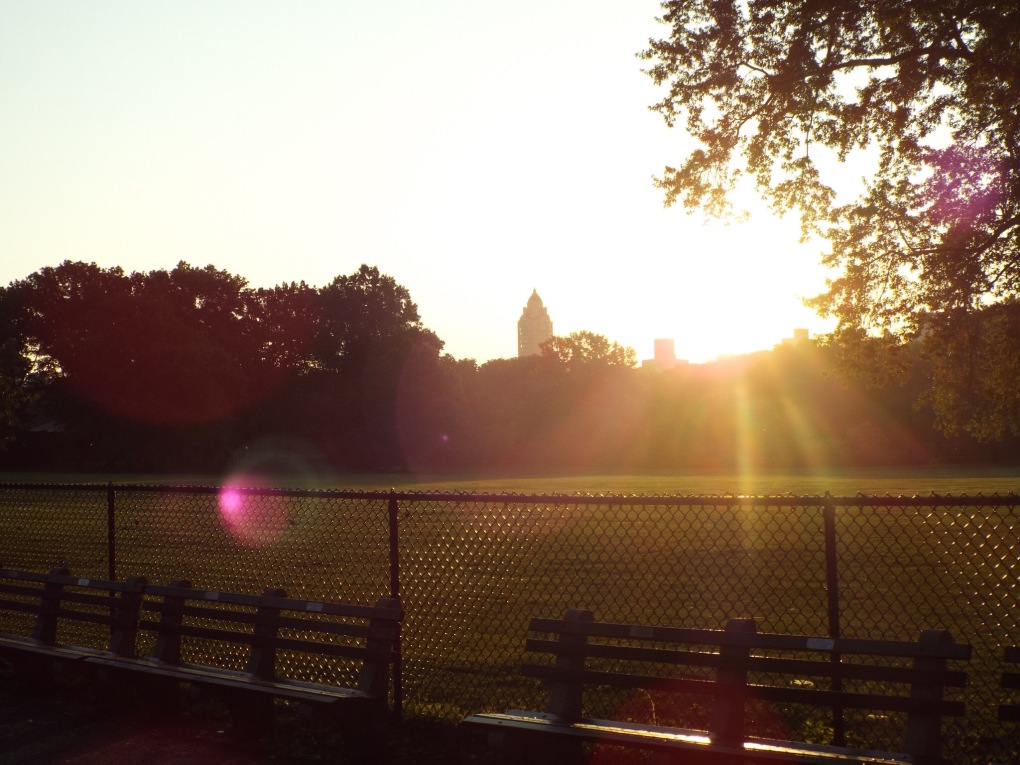 As we were staying just a block away from the park, we went for a walk there pretty much every day. It’s a beautiful place to go early in the morning and stroll whilst it’s really peaceful – most other people are joggers and dog walkers who are on the tracks round the edge so it’s a really relaxing start to the day. 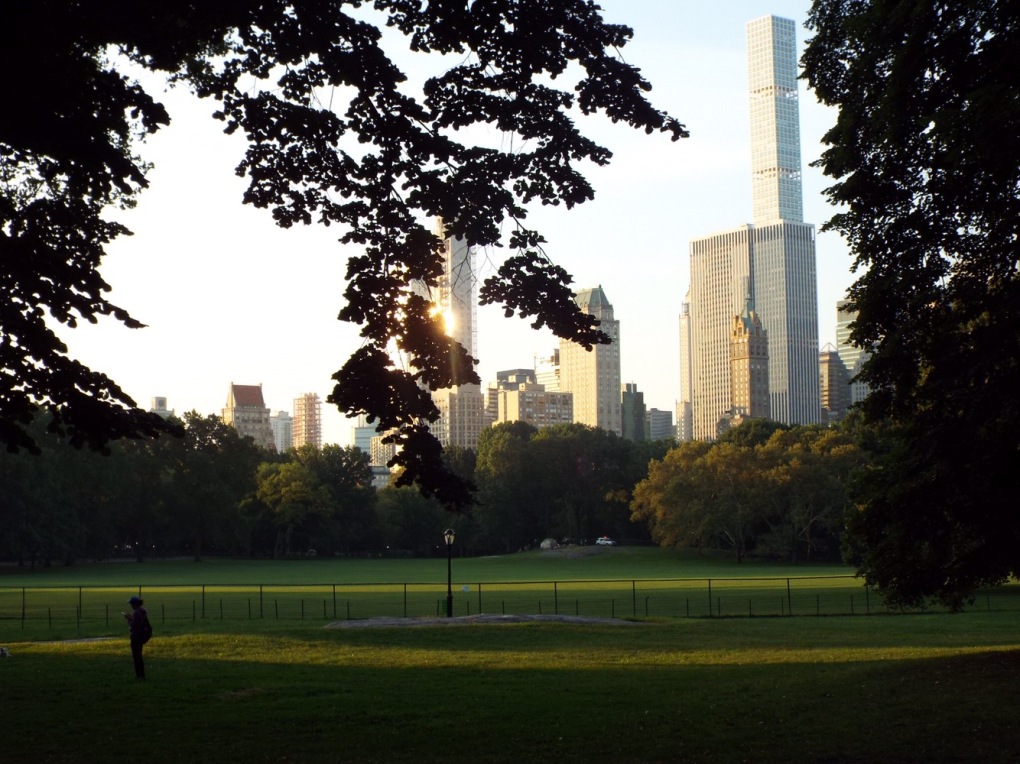 If you’re a film fan, taking part on one of the park’s movie set tours is a really nice way to spend a couple of hours (as well as burn a few calories walking about a quarter of the park area). 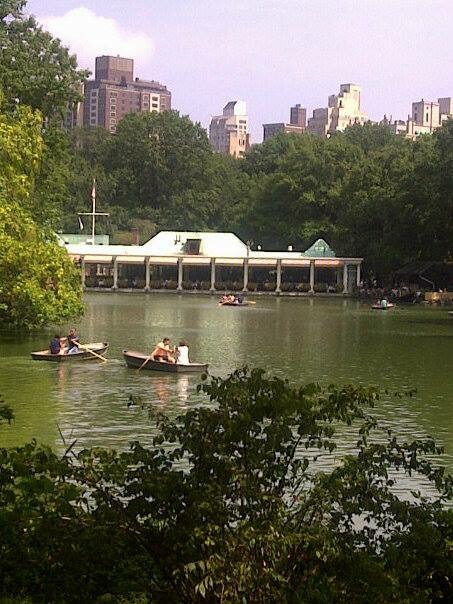 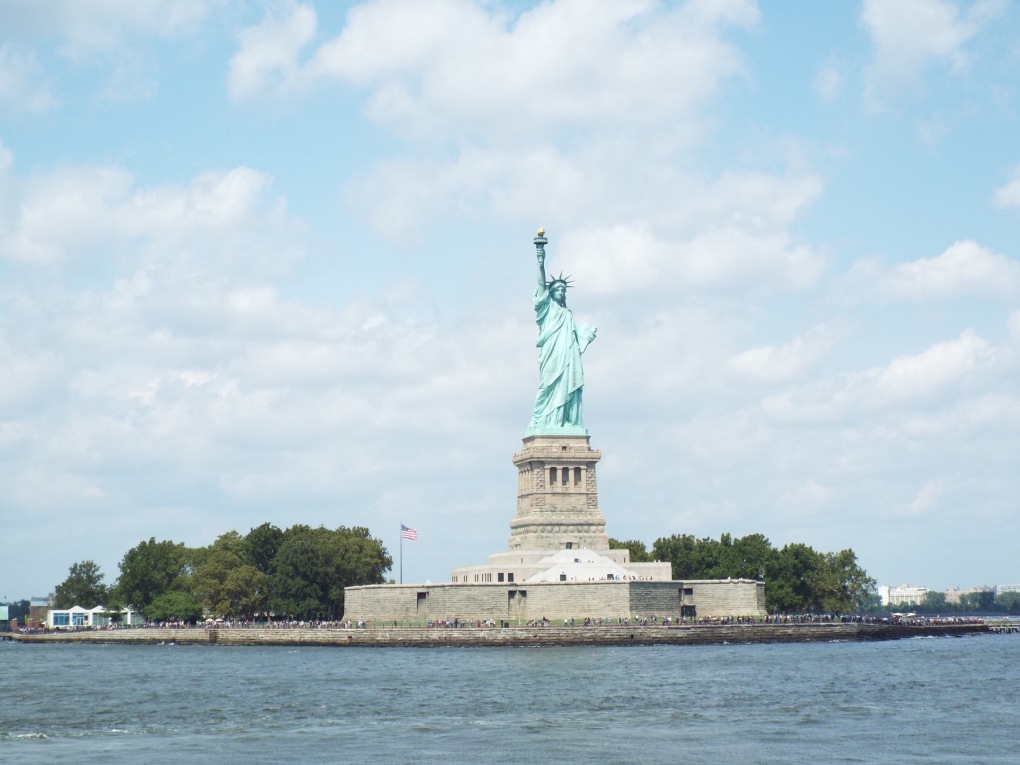 This was one of my favourite places to visit, despite the face that I only really went because I thought I should. As well as the lady herself, there’s a lovely boat ride out to Liberty island to take in the Manhattan skyline. 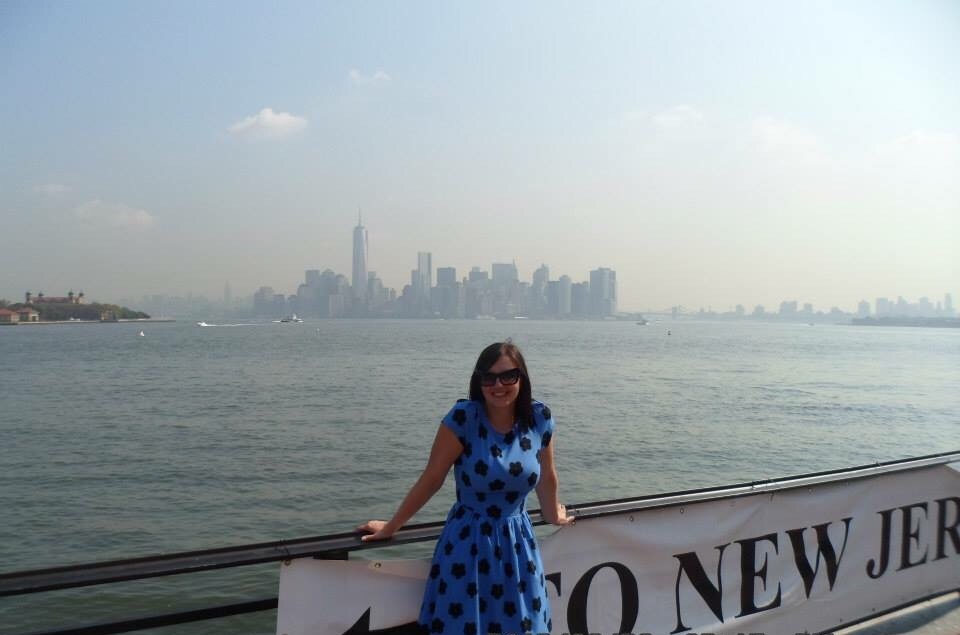 theres a fully guided audio tour right round the island (included in the price and Ina. Number of different languages) which is a really great way to learn as much as you want at your own pace.

Great to do in lovely weather, but don’t get sun burnt like I did! We took the ‘Landmarks’ cruise which also touched on Brooklyn a little, it was really nice way to see the city skyline and learn

(Side note: I’m pretty chuffed with how this pic came out, since I’m not the best photographer!)

If you’re in a city full of sky scrapers, you absolutely have go up somewhere high to have a proper look at the entire skyline! As you can see (this is just one of the many views, I have too many to post) it’s pretty spectacular. 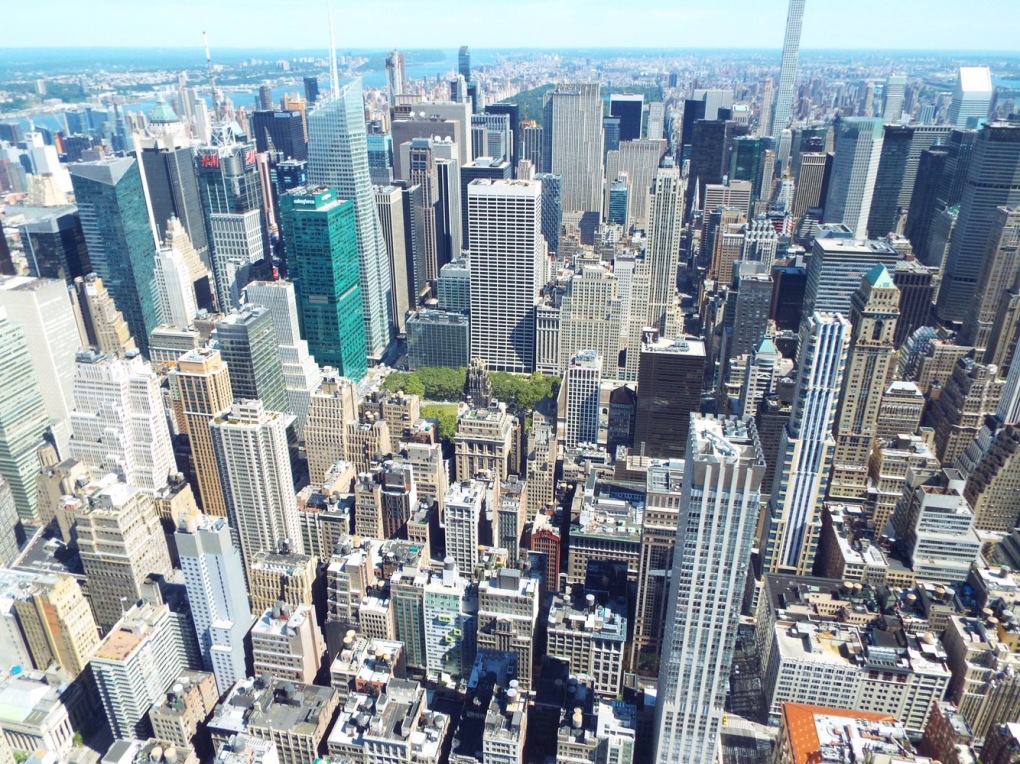 From experience I’d recommend avoiding visiting here for sunset – you’ll be able to see the sun go down fine but you’ll be hard pushed to get a viewing spot near the edge to actually look down on anything as it’s extremely crowded. On this visit we arrived at about 10-10.30am and found it pretty easy to walk around, get good spots to view and didn’t feel rushed into moving to make way for others.

Rockefeller Center  and Top of the Rock 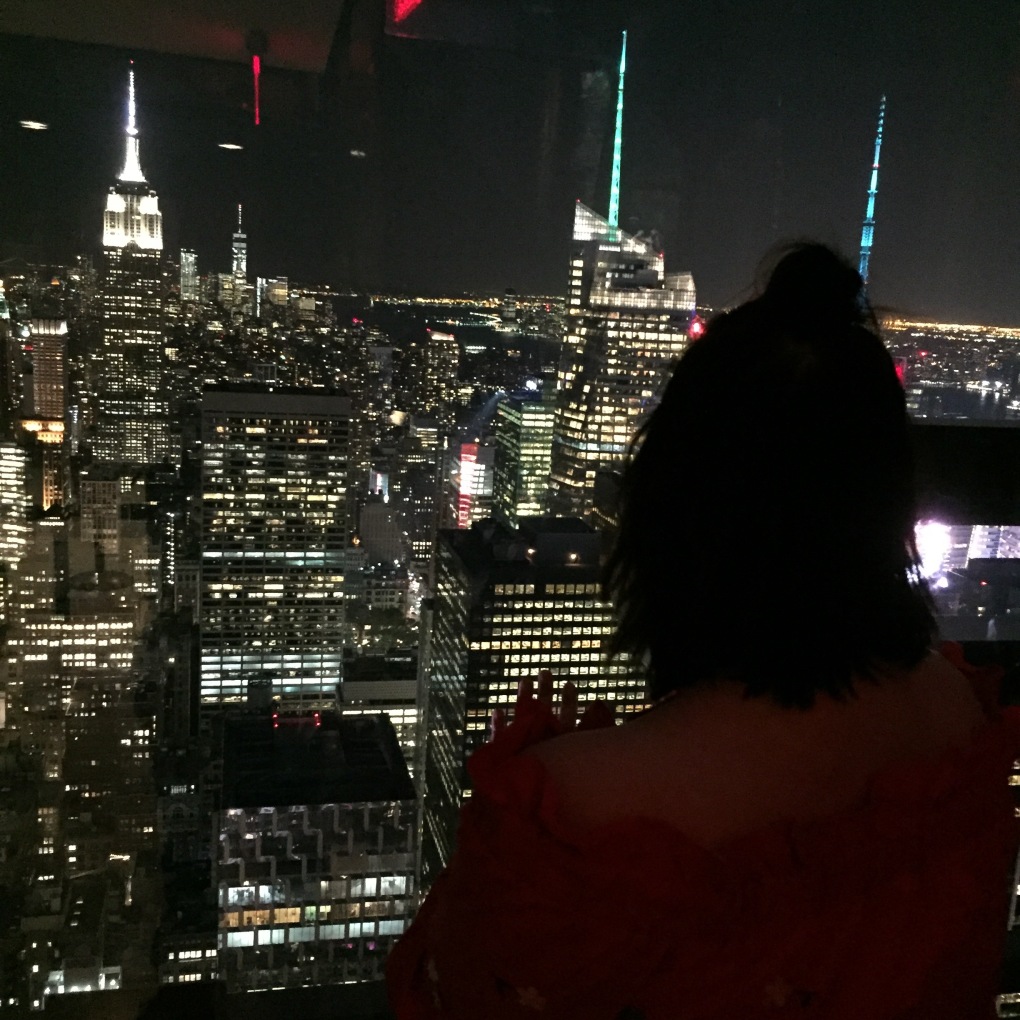 I’ve visited Top of the Rock super early in the morning and at night, and I’d say personally I preferred the latter as it’s lovely to see the city all lit up (if you go too early in the morning it could bit a little foggy with all the city smog, as it was when I did it). As with Empire State at this time it’s pretty easy to get around, get a good spite near the windows and stay here as long as you want.

I also enjoyed the NBC studio tour around he Building. Even if you don’t know too many of the programmes or tv stars mentioned in the tour, it’s interesting to see popular TV sets behind the scenes, including #SNL 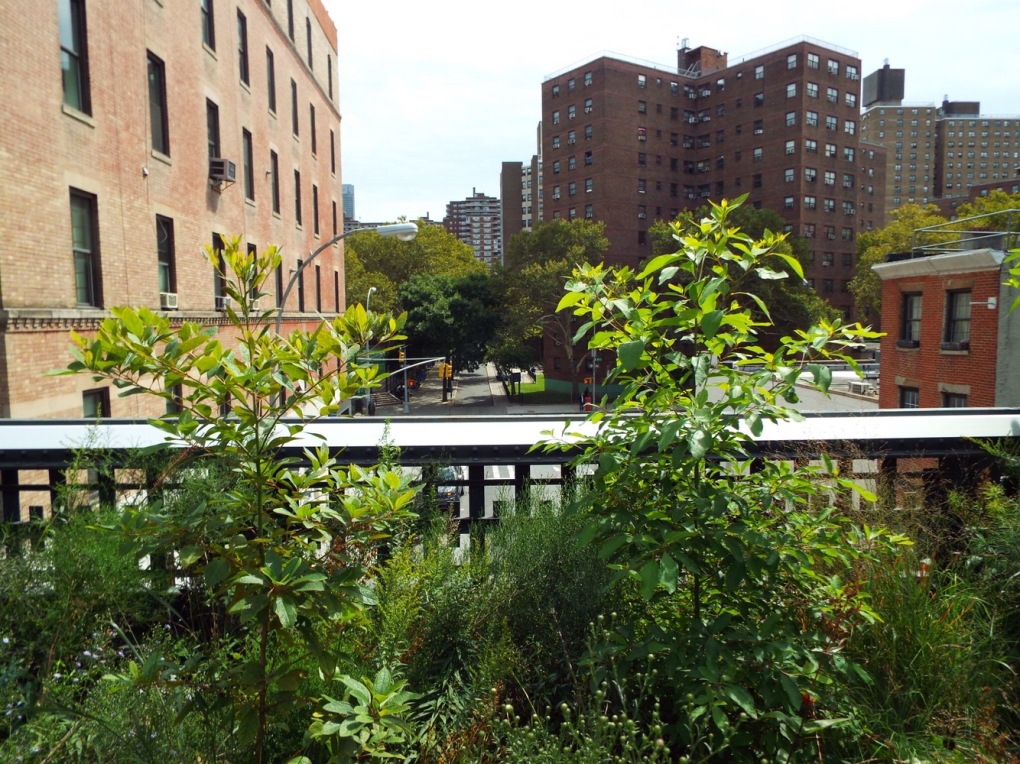 I really like the idea of this project – in case you’re not familiar, it’s an old train tack that has been converted into a wild garden that stretches several blocks.

However, it wasn’t quite as cool and hulled as I’d been led to believe by other people’s blog posts. We visited on a Saturday morning, which was probably one of the busiest times, and it was a little tricky to walk peacefully and at a leisurely pace. If you’re staying close by I’d still say go and check it out, but it’s probably not worth walking 30 blocks to get there as we did.

This one is a bit of a no brainer, and if you’re staying in midtown Manhattan you’ll probably visit here a lot. It’s pretty spectacular at all times of day as there’s always something interesting to look at.

Just a little tip – there are plenty of street performers, some of them not wearing many/any clothes, so if you linger of ask for a photo be prepared to tip.

If you’re a Sex and the City fan you HAVE to make the time to head here, and it’ll feel like a really surreal moment when you do.

Ms Bradshaw’s stoop is 66 Perry Street, Greenwich village, just off Bleacker street. Be clear about the address if you take a cab, as they don’t automatically know where it is (I know right). 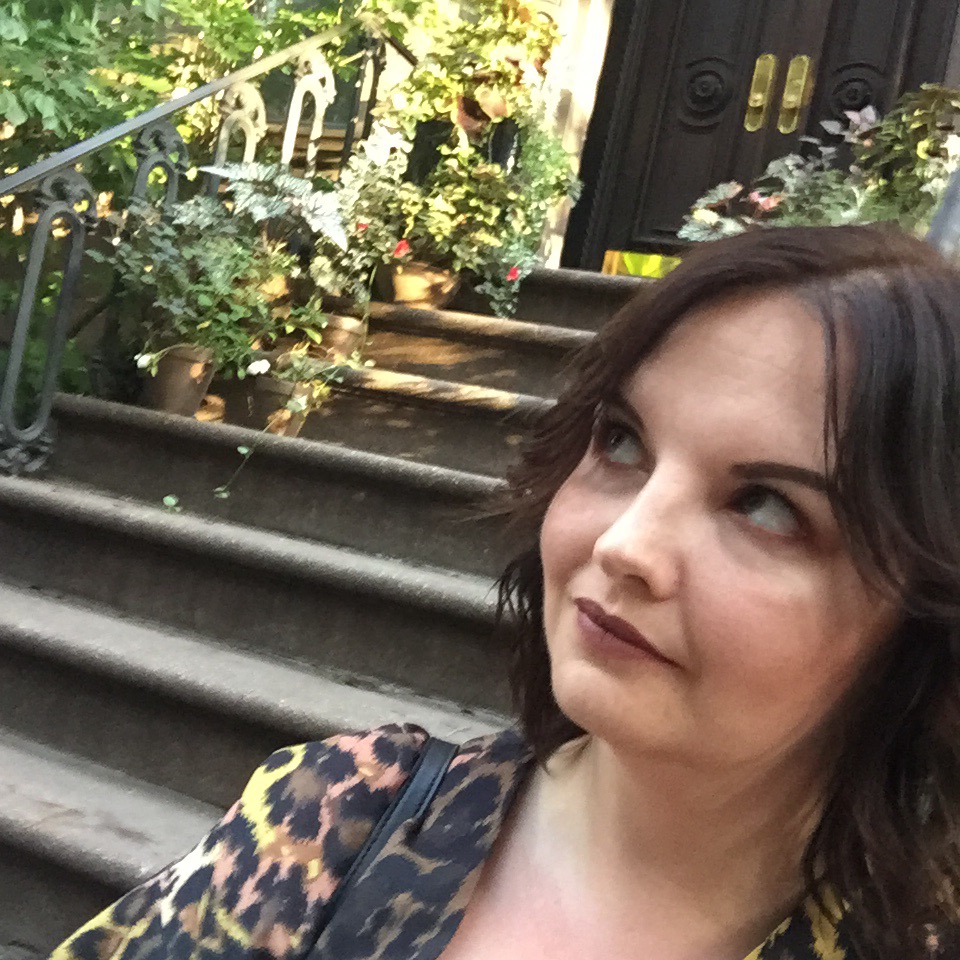 The street itself is kind of narrow companies to other NYC streets but it feels so comfortable and homey, like you’ve been there before. There’ll probably be other people there taking photos too, so be prepared to wait. Another thing worth mentioning is that you can’t actually get up onto the stoop for sitting etc as there are chains across the front. It does ruin your pictures a bit, but I can kinda see why they feel the need to do it.

I’d also encourage you to take a stroll around the village itself as it has such a lovely chilled out vibes about it. There’s great pizza and lovely little stores to spend a few hours.

Take in some comedy

There are a lot of comedy clubs in NYC, as a couple we’re pretty big fans of a good comedian she were keen to check this out.

During our latest visit we went to he number one rated venue in Manhattan, Comedy Cellar, specifically the new Village Underground site. They’re pretty well known for having famous comedians drop by unannounced to try out new material, and whilst we were there Louis C.K dropped by to do just that.

We’ve also visited Stand up NY run by Comedy Central before, which was a pretty fun night too.

Couple of points to note when visiting comedy clubs in NYC – there’s normally a minimum number of drinks you’re required to purchase for minimum spend, so make sure you’re aware of what that is before you go. Secondly, if you’re not from the city and sitting near the front then you will definitely be ‘heckle fodder’ so be prepared!

Drinks at a rooftop bar

Particulalry when the weather is nice, this is another really lovely way to take in some of the skyline. We were lucky that our hotel had a fabulous rooftop bar, and I know of other hotels that have them as well as rooftop pools so it’s pretty easy to find them wherever you are around the city.

As with many big cities drinks aren’t cheap, so researching into which bars do happy hours and when is a really great way to enjoy this in a more cost effective way.

There are also some nice bars and restaurants overlooking Times Square so it’s worth checking out those as well.

My top tip for visiting bars is looking ahead to find out if you can book a table (the more popular bars will require this to get a decent table).

If you’re planning to do a lot of the things mentioned in this post I would strongly recommend buying a multi- event ticket, such at the New York pass or New York City Pass. They both cover a variety of the more popular tourist attractions, tours and events so are great value for money if you’re packing a lot into your visit, but do add up the cost of doing everything separately first to make sure you’re making a saving (it also means you can perhaps do a couple of extra activities that you wouldn’t have done for free)

If you’re still with me then thanks for reading! I know this was a long post but I hope it helps anybody heading to NYC on the future.