Part 2 of my Santorini travel series is coming atcha a little bit later than planned… We’ll say its cos I’m working on Greek time K? Hehe.

After doing an extensive amount research and using mine and the Mr’s unique blend of wanting to plan ahead but procrastinating terrible due to indecision, we ended up getting up ro a week of things that were typically Greek, totally Santorini, fun and chill. If you’re heading to this part of the world at any point in the future, this is what I think should be on your itinerary…

Even though its a pretty small island, you can barely drive for 5 minutes without coming across a vineyard or winery. So it’d be rude not to visit at least one, right?

We chose to do an evening 6 flight tasting with food pairing at Santo Wines on the West of the island, perched high up on the Caldera and a very popular spot for destination weddings. When you walk in and see the view, it’s not hard to see why.

We chose to arrive at 6.30pm so that we could enjoy the view as the sun was setting, it was due to set around 8.20pm.on the day we visited so we wanted to ensure we arrived in plenty of time to enjoy the wine and the views, but did worry we may be rushed into leaving in favour of the next guests. Not the case at all. Our waiter was lovely and made it clear from the start we had all the time in the world – drink the wines as you want, just let us know when you’re ready for your food. He gave us a little talk about the wines (some red wine is actually made from white grapes left out in the sun, who knew?) we were tasting and a leaflet with more information so we knew what to smell/taste for. 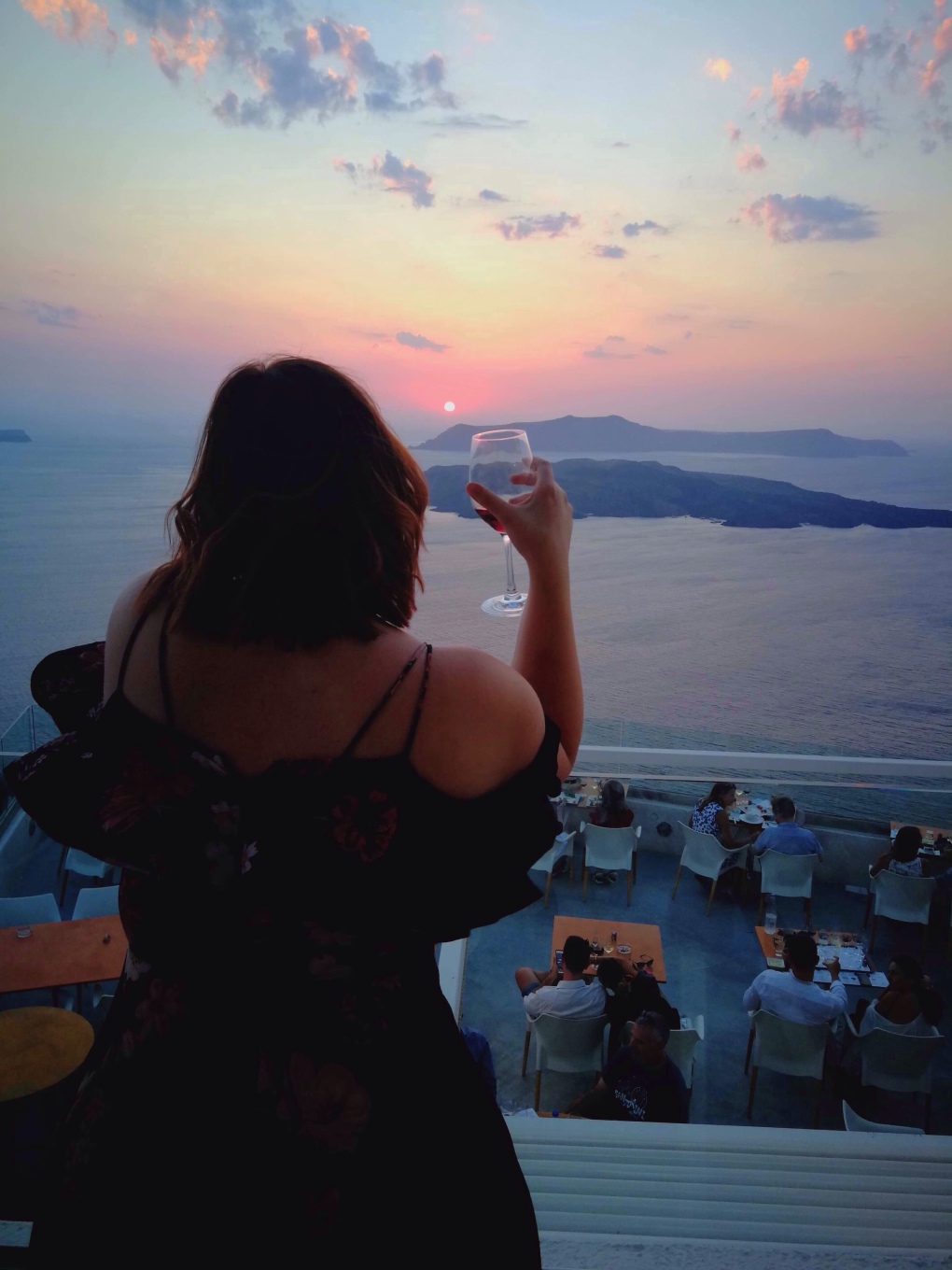 This definitely isn’t a cheap experience (the wine and 2 main courses cost us around 90e) but its one I’m thoroughly pleased we had.

If you’d like to follow in our footsteps and want to get a decent seat/view, book in advance and then drop them a nice little e-mail asking to get a seat at the front. I did this about 48hrs before and got a reply back the same day confirming this request had been granted. Pretty good going for mid-August!

Be sure to manage your expectations a little regarding other visitors though – they want a good view too, and if they haven’t been organised enough to get a front row table they will certainly be squeezing up next to your table to get it.

I literally found out that Santorini Cinema existed a few days before flying out when I spotted a tweet from someone I knew who was currently on the island. Even better, it was about 15 minutes walk from our hotel in Kamari. 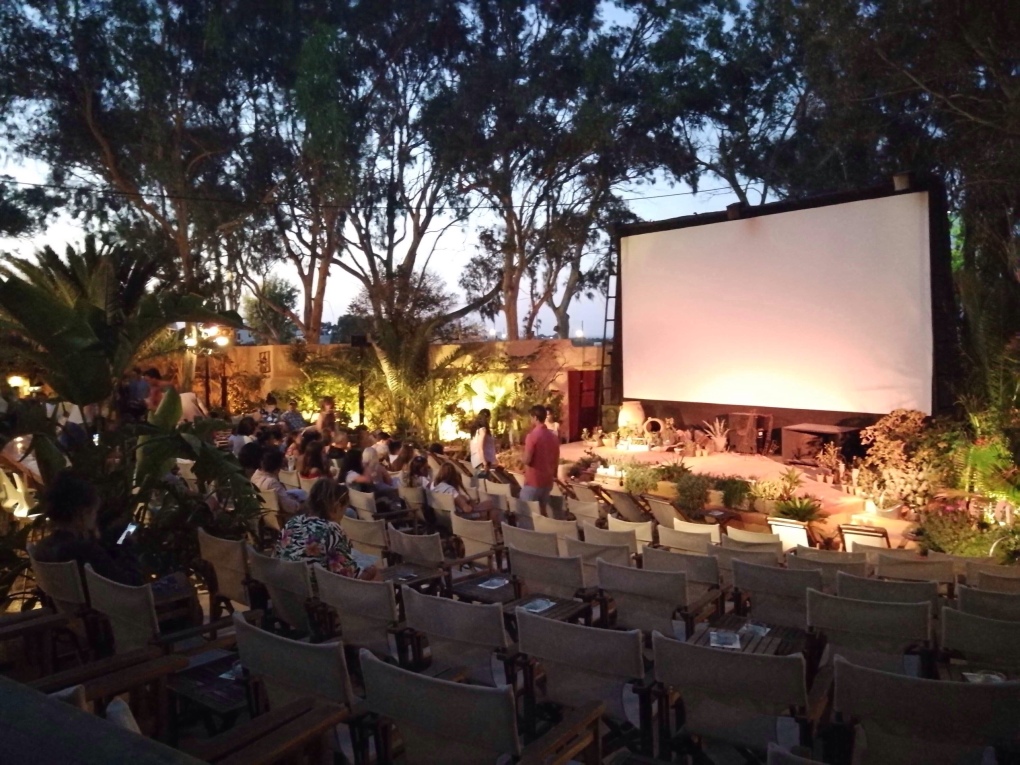 Inside the screening area it was like a really chilled out vibe – director chair seating, lots of greenery and rat pack tunes playing between the film. The film is changed weekly and I found it more than fitting that when we visited Mama Mia! Here we go again was on the bill for us.

Tickets cost 8e per adult which are comparable with UK prices and there’s a bar area serving cinema food as well as hot, soft and alcoholic drinks. Films are shown in English with Greek subtitles and have a 20 minutes interval in the middle.

Doors open at 8.30pm for a 9.30pm start, it’s very popular so you need to be there by the time they open at the latest. In high season (July-August) arriving around 8 is a good idea.

Visit Oia and watch the sunset 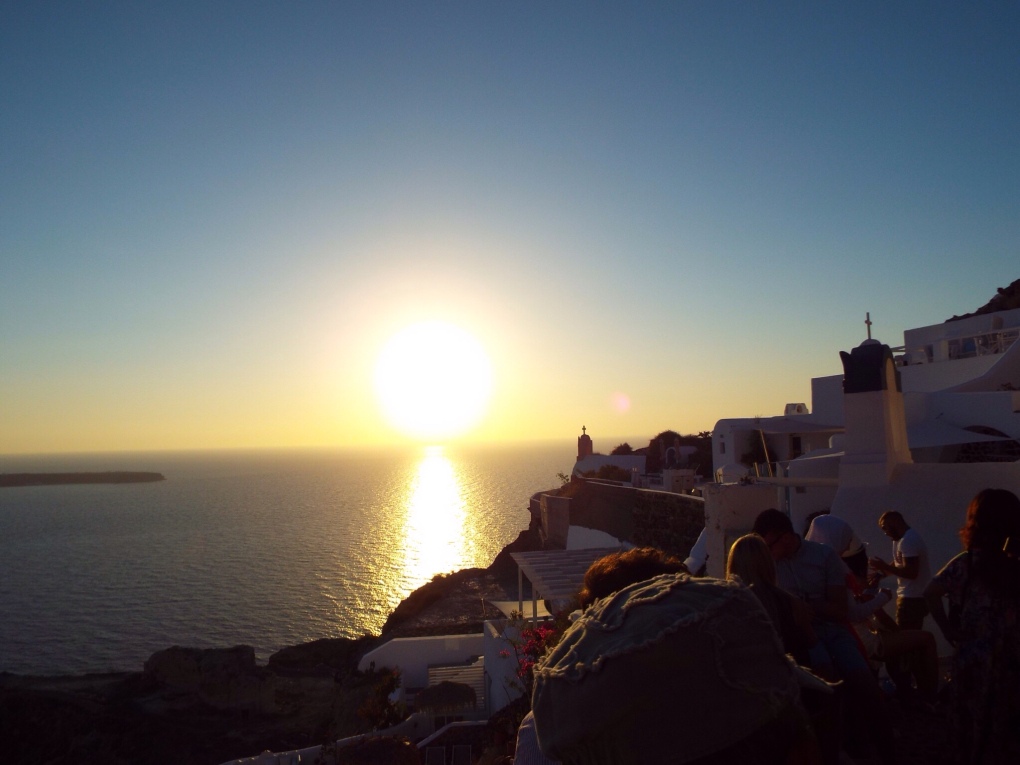 Everybody wants to get the best view of the sunset, the best photos, the best sassy shot for the ‘gram, and they will start to claim them along the walkways over an hour before the big moment. Its fairly civilised but EXTREMELY Crowded and can be a bit stressful when you’re trying to leave, so I would definitely consider putting your hand in your pocket and booking a bar or restaurant that has a great view of the skyline. The ones with the prime views won’t be cheap, but it’ll be a lot less cramped/sweaty and you’ll have a lovely wining/dining experience to boot.

Watch the sunrise on Kamari beach

The West is where you see the sun go down, but over in our resort was where it rose, and the beach was a mere 350m from our door. We had to get up before 6am (we went back to bed for a little bit afterwards) and it took a while for the actual Sun to make its entrance, but it was a lovely contrast against the black beach and blue waters.

Drink cocktails on the beach…

Kamari and Perissa both have plenty of loungers that offer waiter service from the restaurant/bar they belong to, so take advantage. Some of them will charge you for using the loungers in addition to anything you order, however there are lots that allow free use in exchange for buying food/drink which is much better value (generally speaking, the loungers you pay extra for aren’t a great deal nicer for the money, so in most cases you’re not missing out).

… and with a view 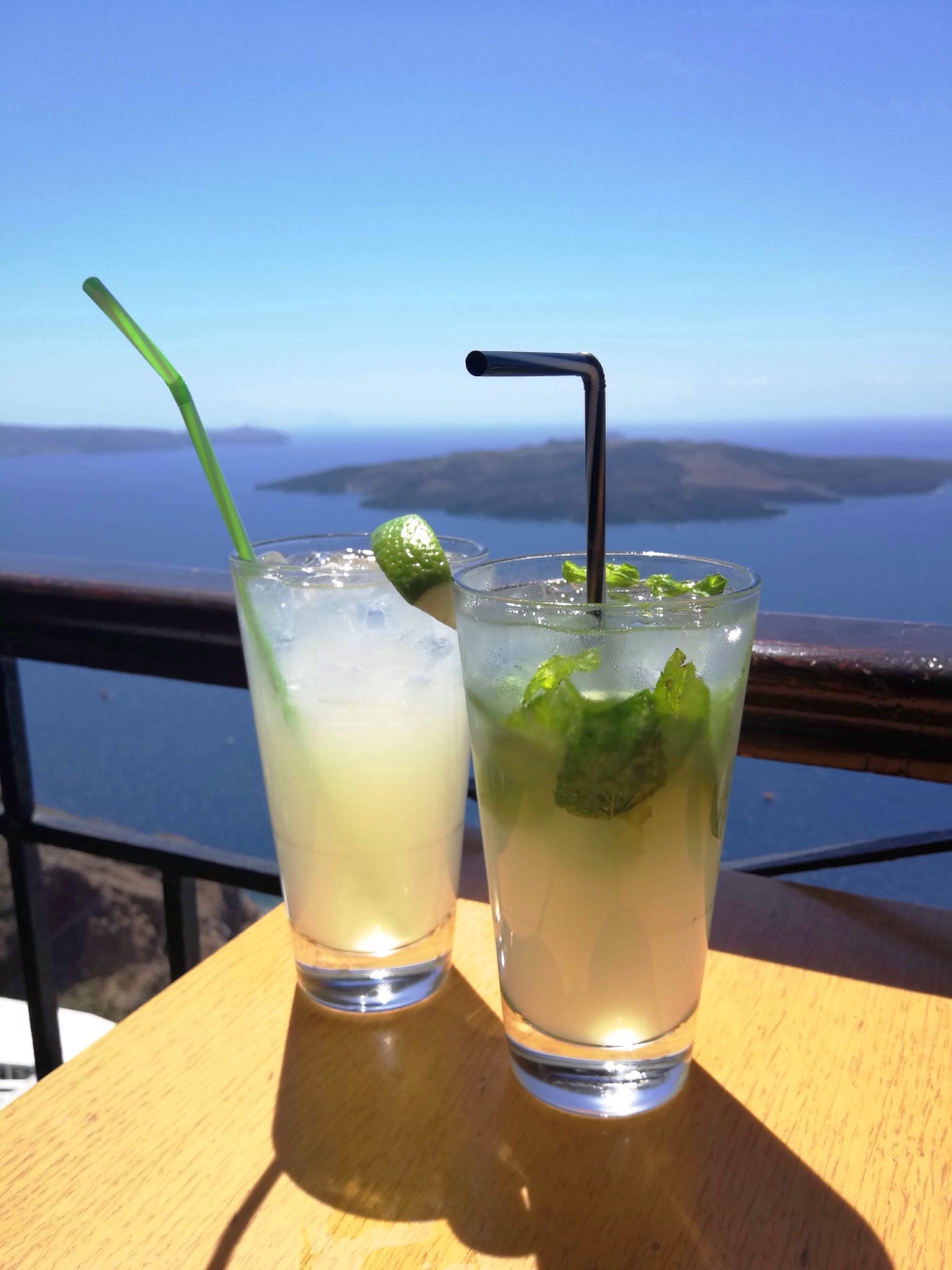 There are views for days, and lots of places to enjoy them from whilst sipping on a cool beverage. When we visited Fira there were tonnes of bars and restaurants looking right over the smaller islands, admittedly a little more expensive than those that don’t but definitely worth it when you need a pit stop in the midday heat.

I’ve been to Greece and the Greek Islands several times in my life and have never taken part in the plate smashing ritual (my mum seems to vaguely think I may have done at age 9 when visiting the mainland, but can’t be sure)

We didn’t see many places that active did this in Kamari – one was Boat House Taverna that advertised it twice per week, the second (and where I did it) was To Koutouki Tou Bekri Taverna and about 20 metres from our hotel.

They also had some great traditional Greek music from this guy, and pretty delicious food (more that in a future post) 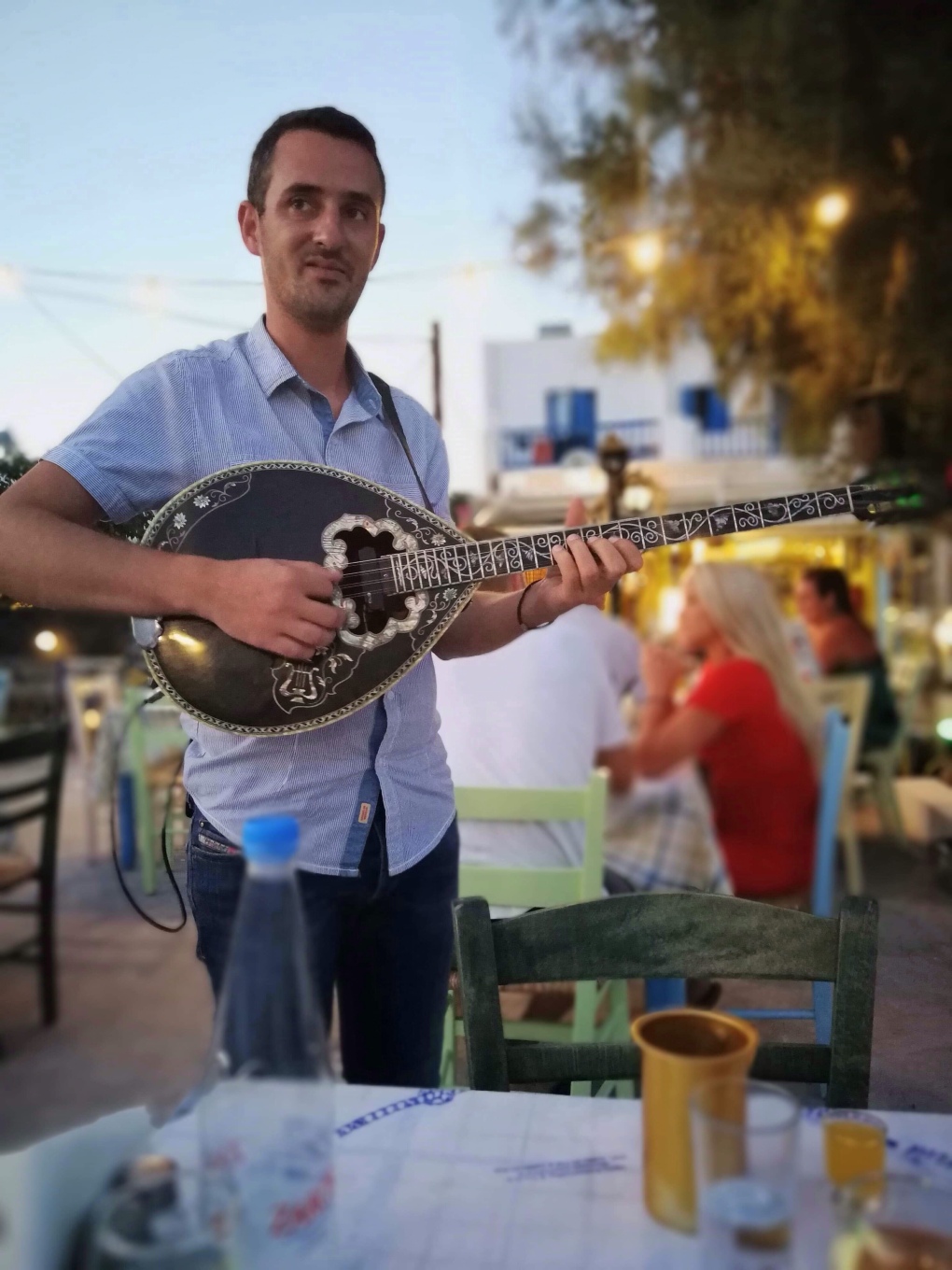 During our stay we also did a catamaran trip along the coastline as we tend to seek out boat trips wherever we can, however for the type we usually do (5/6hrs, swim stops and food included) it was very pricey at 90e per person without getting any more value for money. We booked locally with Sunset Oia that were a really nice company and also had some stunning semi-private boat trips (around 140e per person)

Other things people recommended to do whilst in Santorini include:

Visiting the volcano and hotel springs – most of the better value boat trips offer stops at both of these places as standard. I’m told the volcano is active but currently less than 100 degrees Celsius so is less than a minor threat, however hiking up to the top and back in August heat didn’t feel me with joy. We did visit the hot springs on our boat trip too; disappointly though they’re not hot. Not even warm. Tidal erosion has cooled them down completely, so it’s not really the quirky natural wonder you think it’s going to be. Damn global warming.

Quad bike hire: I mentioned this briefly in my last post as its incredibly popular with tourists, however it’s clear that may of the people we saw using them weren’t using them safely. Driving on the wrong side of TV e road and filming their ride rather than hiding on without helmets…do you have a death wish people??

So that’s flavour of key things to do whilst in Santorini. In my next post I’ll be doing a guide to Greek food and some Santorini specials – it will make you hungry, but it may also inspire you (as it did us as soon as we got home) to try some Mediterranean cooking.