I may be deep into house move mode (quick update: we’re in but are largely surrounded by mountains of unpacked boxes containing items we haven’t seen in almost a year and probably forgot we had) but I couldn’t let the #MetGala2018 go by without having a good ol’ nosey at what everyone was wearing could I!

This year’s theme was Heavenly Bodies: Fashion and the Catholic Imagination, which is a pretty risqué theme when you have a bunch of famous people in one place known for being edgy and pretty close to the wire with their fashion choices at the best of times. I’ve seen a lot of chatter that it was a bad theme choice and that attendees who stuck to it were a bit disrespectful for doing so, honestly I don’t think so. It’s a modern society, religion exists within it and everybody has a different interpretation of what they find acceptable, so I don’t think any theme would be without taboo. Besides, taboo is what the Met Gala lives for! Here are my fave looks (NGL: it was hard).

Despite the religious theme appearing a little tenuous at first glance, you can’t deny that Kim looks SMOKING. she’s a mother of 3 goddammit!!! This gown was created by Versace and takes inspiration from the 90s chain mail trend infused with the brand’s iconic crucifix references from its Italian heritage, which then makes you realise her overall link to the theme is a little stronger. Classic silhouette, perfect fit, glorious colour against her skin tone, amazing smoky eye (nobody ever does a traditional smoky eye anymore, after this I’m totally bringing it back next time I got “out out”) and simple sleek hair to show off the dress and jewels. My only teeny negative is that you can see the slip/shorter layer underneath the dress which takes a little away from the luxe finish, I would’ve looked better to have full length or nothing.

Yasss Jenny from the block, WERK! This dress is all kinds of fierce and structure at the top and feminine fox at the bottom; this combo totally shouldn’t work but it so does. I’m not sure who designed it but the top is giving all the Balmain vibes with the beading and sharp shoulder detail. The pop of blue is stunning. That makeup is super neutral and the exact opposite of Kim’s but it’s just as stunning, I need to know what lip colour she’s wearing and what tan she uses!

This level of commitment to fashion when you’re semi-heavily pregnant is quite something – I just have me to worry about and most days the world is lucky if I manage to brush my hair and don’t smudge my eyeliner!

I’m not quite sure how intensely this has interpreted the theme but the intricate beading is reminiscent of the ornate detailing found in church decor, and the overall look with the train and headpiece could be almost bridal. She was right; her big Bronx boogie got all the girls shook.

I think a lot of people would argue that the link of this look to the theme is beyond tenuous and more shock value, but those people forget there’s two sides to religion – saints and sinners. Cara has made it very clear which side she’s coming down on! She’s like a sexy Angel of Death, and I deffo would’ve used that headdress as an excuse not to put slap on if that was me! That said, this does kind of remind me a little of what Kendal Jenner wore to last year’s event – black, mesh and all kinds of fleshy goodies peeking out, but if yo’ goodies look good and you’re in your 20s then why the hell not I say!

It’s very rare I see Blake and think she doesn’t look good, and I may have let out a little squeal when I saw this gown…wowzer. The cut and fit of this makes her body look amazing, and that train is everything (kind of reminds me of that one Rihanna had on the weird yellow gown a couple years back. But you know, nice.) I was so busy going googly eyed that I didn’t even notice that she can’t have been wearing underwear! I would say this is fashion the represents Catholic religion specifically, but I would say that it has undertones of Asian-inspired bridal dress with the deep red and luxe gold embroidery which is still a nod to the theme in part.

This is another look that has religious associations but more Asian-inspired than Catholic, and I really applaud Priya for this look as it’s perfectly demure and classy (embroidered hood/shoulder piece and deep red velvet) but still pretty sexy with that Jessica Rabbit cut skimming her curves to perfection.

I like it when I can include men in these sorts of posts! I feel as if this is the sort of outfit an Evangelical preacher would wear when delivering some kind of mass sermon, the kind that’s as much about performance as it is delivering the Lord’s message. For that alone, he’s nailed it. 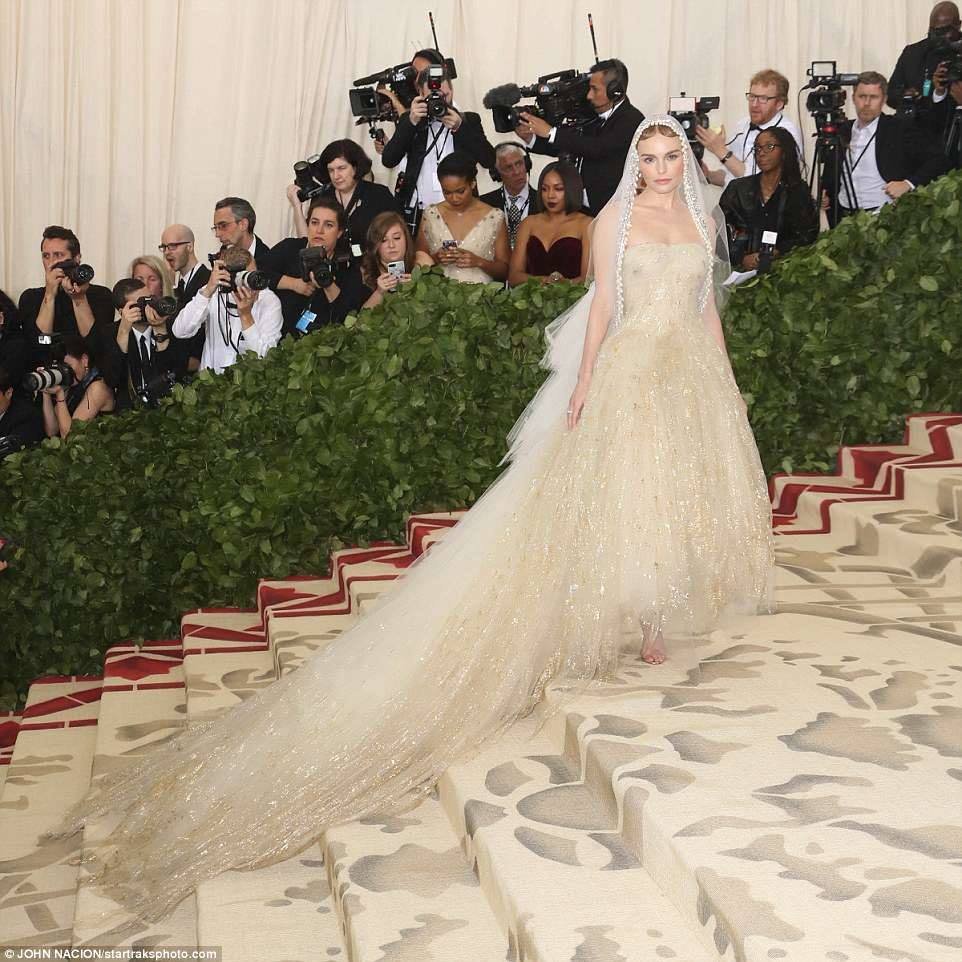 It probably doesn’t get more Catholic than a virginal bride does it! The gown itself has that beautiful frothy princess feel which I adore (but could never pull off) and that veil is screaming Holy Communion at me. It would’ve been nicer if she’d matched the colour of the veil and gown a little better, or at least used some of the gold accents to tie it together better, but I’m not mad at it.

Just when you thought it couldn’t get any more on the money than Kate Bosworth as a Virgin Bride, we get Rih Rih comes AS THE FRICKIN POPE (I’m not sure if it’s blasphemous to use that word in front of Pope, but there it is). Of course she does. Not only that, but apparently he was in full support of this look?! To be honest, I’m surprised that Madonna didn’t turn up wearing something similar.

Well, that’s fashion’s finest parade done for another year, and I for one think it was one of the best yet!